Responsibility (An Addendum to a T-shirt) 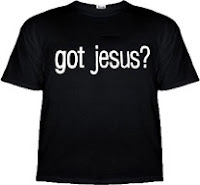 Okay, so in my last article, I talked about the idea of being afraid to “stick out” in a crowd, the fear of being different in society. I asked the question, if I am so able and willing to show the world who my favorite sports team is, why should I be afraid of showing the world that I am a big fan of Jesus? I related the scariness of being in a foreign country to blending in… and then to how we Christians tend to want to blend in to society rather than show the difference He has made in our lives. I talked about my decision to be more diligent in “wearing” my beliefs emotionally and physically… enter my collection of Christian T-shirts…

Yes, I wear them proudly but I felt moved to share a little story with you… a story of a slight blunder I made.

It had been a long day of parenting, one of those days where I was counting the minutes until Brett’s bedtime… he had been challenging, I had been challenging… we just hadn’t had a good day (I’m sure none of you parents out there have any idea what I’m talking about). Well, the bedtime ritual had begun and for some reason my hubby wasn’t home so it was all up to me that night. We had finished brushing teeth after 10 minutes of whining “I don’t like this toothpaste.” We had gone pee-pee after 10 minutes of “but I don’t have to go pee-pee” and we were in the middle of putting PJ’s on after a 15 minute battle about “but I don’t want to wear THOSE pajamas.”

Just as I was helping Brett slide on his blue pajama top (which was the honorable mention choice of sleepwear) the doorbell rang. The dog began barking and all hell broke lose. After a short but apparently not long enough pause, I slowly walked over to the door and opened it.

With Brett at my leg and the dog trapped in the bathroom barking, my eyes fell upon a man I had never seen before. He smiled and said, “Good evening ma’am… My name is John and I’m out here today to see if can help you with your siding needs. We have a great sale going on and I’m ready to offer you a great deal.”

Annoyed… okay… really annoyed I interrupted him and spoke in a tone of voice that would have made satan himself run for cover. I said “I’m not sure if you noticed, but my house is brick… I don’t need any siding. Besides, I am trying to put my son to bed after a really long day.” I looked at my watch and continued, “do you think you could find a better time to walk around bothering people?” He starred at me blankly then began to tell me to have a nice night but I didn’t even let him finish… I turned and slammed the door.

I know, I know… I was a total bitch! To be honest, I felt really bad about the way I had treated him. Almost immediately I realized I hadn’t stopped to think at all before I spoke. My mouth had just gone off on autopilot. I wanted to run down the street to apologize but I was too embarrassed. Worst of all, my son witnessed my horrible behavior. After telling him how wrong it was for me to treat the man that way, I went back to the business of putting Brett to bed and before too long, the house was quiet.

I went into the bathroom to wash my face and stopped to look at myself. I thought, “Well, aren’t you proud of yourself Wendy?” and that’s when I realized something more awful than all of it… I had on my pretty pink t-shirt that says “Love Thy Neighbor” in GIANT letters. Argh… a final stab of forced humility. I imagined the damage I may have done to God’s kingdom with that 5 seconds of unfiltered words. Sure, he was just one man but let’s say he was on the fence between committing to a life with Christ or heading the opposite direction… my actions, coupled with the t-shirt could have very easily made him turn away saying, “and that’s why I can’t stand Christians!” He was merely trying to make some wages… he was doing his job… and quite kindly I must say.

Dear mister siding sales guy – I am really sorry for being so horrible to you… and no… Christians aren’t supposed to act that way… but we aren’t perfect either, which I suppose is the point of our Christianity. We need forgiveness for our thoughtlessness and cruelty. You didn’t deserve the way I acted and I pray that wherever you are, God will put the right person in front of you to show you the way Jesus means us to live. I humbly ask for your forgiveness.

The moral of the story here is that my Christian t-shirts should have come with an official, legal contract which clearly states that the wearer of said t-shirt promises to conduct themselves in the proper manner while wearing and since the store didn’t provide me with such a document, it is really not my fault. Just kidding… the moral of the story is that all Christians make mistakes…but when I choose to step out into society, claiming Jesus as the Way, the Truth and the Light… I do have a responsibility to do my best to wear Him in a way that actually shows the world His light. There’s already enough darkness out there.
Created by Wendy at Friday, June 19, 2009