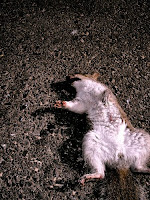 We cut down two trees in our front yard. One was way past dead and could have fallen on our house at any given time. I’m glad to have that eyesore gone! The other was hidden under a canopy of other trees so it has been reaching to the west for sunlight since it sprouted. As a result, it was leaning excessively and not looking all that healthy. We made the decision to cut them down and what had taken decades to bring into current form, only took less than 30 minutes to bring down to the ground and cut into small pieces. It’s amazing to think about how one decision can drastically change everything.

The next thing we had to do is get all the debris out of the yard. We hauled the small pieces to the wood pile in the backyard to be used in the fireplace next winter and we cut and bundled the brush so we could leave it on the curb to be picked up by the trash company. Thirteen very large trunk pieces remained and littered the yard so we had to figure out what to do with them. They were too big for trash pick up and too big to burn in the fireplace. We didn’t have the tools needed to split them and didn’t have a vehicle to haul them in. My husband rolled them over to the side of the yard and made a neat pile, hoping we would figure out a solution quickly.

The next day when I went out to get the mail, I was startled by something I saw in the pile of huge trunks. A squirrel tail was poking from between two trunks on the bottom of the pile. I took a closer look and saw the squirrel tail was connected to a very dead squirrel. It was strange. It was like he just crawled into that nice little spot to die… he wasn’t stuck under anything and didn’t appear to be injured… just dead. Poor little guy. I have never gotten rid of a dead animal on my property before and I was really hoping my husband would take care of it… bless his heart, I think he was hoping I would… we both ignored the squirrel in an effort to wait for the other to take care of it (sad, but true.)

A few days later, I had worked out a deal with a landscaping company. I paid them a few bucks to come and pick up those trunks and get them out of our yard. After lunch, my hubby decided to take the dog for a walk… off they went while I cleaned up the dishes from cooking eggs, bacon and hashbrowns (a Sunday favorite at my place).

A few moments after he left with the dog, I hear the garage door open and in a slightly alarmed voice, I hear Ryan say, “Babe… we have a problem!”

I walked over to the door to see what was the matter. My eyes fell on my husband and thankfully he looked fine. I felt a little relief. I then looked down towards the dog, she walked into full view… cute little Goldie, the Golden Retriever, proudly hauling… the dead squirrel in her mouth.

I screamed “GROSS!” as loudly as I could. Then heard my husband explain, “I can’t get her to let it go… what do we do?” I began laughing in between my loud “GROSS” screams. I grabbed the training tool I have that makes a buzzing sound that only dogs can hear. She hates that thing and usually just picking it up makes her do anything I ask her to do. We went out into the driveway and I pushed the button… five times… and it became obvious that she had no intention of giving up her new toy. Her jaws were clamped tight and we could not budge her. Now, imagine for a moment, trying to open a dog’s jaws to get a dead squirrel out of its mouth… while trying desperately not to touch the dead squirrel… not easy I tell you. By some crazy miracle, she finally gave it up… and the squirrel’s limp, lifeless body hit the ground.

Hubby dragged the dog away from the carcass and that left me as the leading candidate to do away with the body… lucky me. He (yes, the squirrel was a he) was gently placed in a hefty bag then triple bagged for safe keeping until tomorrow, trash day.

I can’t get the image of my dog standing proudly with a gross, disgusting, three-day old dead squirrel in her mouth out of my head. It is totally cracking me up! Here’s the sad part though… I don’t think we humans are all that different than my dog in matters like this. How many of us have our jaws clamped tightly on something that is so bad for us that everyone around us is trying their hardest to get us to let go? They are buzzing us or maybe even commanding us to put it down. We know it’s because they care for us, we know that it’s probably the right thing to do… but because of our sinful nature… we just can’t part with it. I believe 100% that it takes a miracle to pry it from our grip. It’s only God’s power that can remove the stinking carcass from our mouths.

I’ve been working so hard for over a year now to make God’s current plan for my life come to fruition. He tasked me, along with my sponsor Jerry, with starting a Celebrate Recovery group at Community of Hope in Mansfield TX. We have been so blessed to have 10 of the most awesome people ever created, all special in their own unique ways, all people who have let God’s power free them from their own personal dead squirrels… come into view to partner with us on this project. Opening night is April 7th and I am filled with anxious energy… most of it good. I can’t wait to see how God is going to use the obedience of myself and the rest of the leaders to help others open their jaws and release the stinking carcasses that are literally ‘reeking’ havoc in their lives.

If you are reading this and you have thought that perhaps you might be interested in Celebrate Recovery… but you are trying to talk yourself out of it, maybe you don’t think you really have a problem, maybe you don’t want other people to know your struggle, maybe you’re too embarrassed, maybe you think we’re just gonna sit around and complain… or maybe you don’t think your issues is “big” enough to go to a group like this over… I ask you to loosen your jaw a little. I ask you to set your excuse to the side and just make the decision to come if for no other reason but to support me in my venture… I really hope I won’t be standing up front looking at 100 empty chairs on opening night. Come… support me… check it out… however you make yourself get there, make the decision to come. It’s amazing! One decision truly can drastically change everything.
Created by Wendy at Wednesday, March 31, 2010