Not a Hallmark Moment 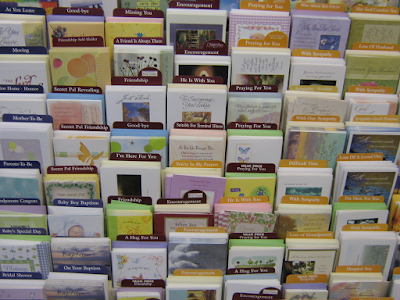 I don’t even really know how to start this story... but I guess I’ve got to start somewhere. As you probably know, Ryan and I moved to Wisconsin this last October. We have been really happy with our decision so far and have found many positives to this cross-country relocation from Texas.  Brett is thriving at his new school and is being challenged in ways he would not have been otherwise. We love our new house and have even really enjoyed the weather. It’s kind of nice to not be sweating constantly.

One of the positives that came with this move was when I began having a repeat of intestinal symptoms from last summer, a completely new set of doctor eyes and ears began to care for me. With those new eyes and ears came some different tests and in the end... a brand new, very specific, very real diagnosis for my problems that was based on a simple test not one of my doctors in Texas ever thought to order; a sonogram. Turns out, my digestive problems were not a result of cryptic IBS or the result of me “maybe” having Celiac disease as my previous doctors had best guessed. No, my problems are due to the giant tumor I have growing on my left ovary which is obstructing my large intestines. And my chronic abdominal pains are a result of a large fibroid tumor in my uterus... which by the way was causing a lot of other problems too. Wow... all the testing of the last year and a half and no one ever thought to look for that. It sort of blows my mind. None-the-less, I was ecstatic to have a real answer finally... and a real plan to fixing the problem.

After several opinions, I settled on the plan to have the tumors removed in surgery. With the size and placement of my tumors as well as the great possibility I am also suffering from endometriosis, I decided to go ahead and have a hysterectomy in which the doctor would do her best to make sure I ended up with at least one ovary intact. My surgery was scheduled for May 2nd and I couldn’t wait to get this over with!!! Praise the Lord, I was going to be free at last!

The Friday night before my surgery, April 27th, I had a dream that stuck with me. I dreamed that during surgery, the doctor ran into a complication and things became dangerous for me. I told Ryan about the dream in the morning and told him I wanted to do my best to make sure nothing like that would really happen.

A few conversations with my doctor and a blood test later, what happened in my dream was confirmed. It was my worst nightmare and it was true. Surgery for May 2nd needed to be cancelled because, just like in my dream... I was pregnant.

I couldn’t even try to make this up - I mean, there is a reason Hallmark doesn’t have a card that says “Sorry the hysterectomy to get rid of your painful tumors didn’t work out but congrats on your pregnancy.” Hallmark, if you decide to add that card, be sure to put it in the sympathy section.

I cried. I’m turning 40 this year. I have never had a desire to have another child... NEVER. I am not one of those women who loved pregnancy. I am also not one of those women who got tricked into having another baby because she forgot what being pregnant was like... no... I will never forget the hell of my pregnancy. I don’t deal with nausea well, I don’t have a ton of patience, I’m thrilled to have potty training done and over with. I’m glad I’m not a mother of a preschooler any longer. Ugh... really God? Pregnant? Me? What kind of cruel joke was this?

I got mad... livid. My body had been hijacked again. The little leech inside me was going to take all the good stuff and leave me with the leftovers for 8 months. The nausea, this time with vomiting was going to make it difficult for me to have much desire to do anything. I was going to have to stop taking all the medications that had been keeping me sane for the last few years... goodbye hormonal balance, goodbye ADHD relief, goodbye easy sleep. I had to give up the things that were good for my emotional health so I could protect the leech. LIVID. Did I mention, I’m turning 40 this year?

I yelled at God for this cruel irony and used a few curse words too. I told Him if He wanted me to be happy about this He needed to give me a very clear... crystal clear sign that this was what He wanted. At my sonogram I found out my due date is Christmas day 2012. Really God... my baby will be welcomed to the world on the same day Jesus was born? Turns out this "sign" made me even more mad.

My doctor talked things through with me. It was made clear to me that I certainly had the option of terminating this pregnancy. I mean, who could fault me for doing such a thing when I have a tumor that is blocking my intestines and chronic pain due to a fibroid the size of my fist. This wasn’t planned... wasn’t my physical safety at risk here? Was my emotional sanity at risk if I went off my meds? I’m almost 40 which increased my risk factors (not sure I mentioned that yet). Geez. Seemed pretty cut and dry... if there was one time in life to consider being selfish, it was now. It was justifiable medically too... bonus. My turmoil seemed to lessen slightly. I felt peace might be around the corner.

Well, I was wrong. The more I contemplated the possibility of terminating, the more torn up I felt, even if it did seem medically justified. The more I realized I wanted it to go away, the more angry I became and then when the doctor told me... I was going to have to go to an abortion clinic in Madison to have a consultation if that was my choice... I was back to LIVID. I knew there was no way I could walk through those doors... NO WAY. I felt like an animal trapped in a cage, with a leech. Oh, and I'm turning 40 this year.

I called a dear friend in a crazed, angry, rant. She listened and she sympathized... but she didn’t tell me what I wanted to hear. Instead she spoke truth. She said many wise things but the most powerful of all of them was "God never makes mistakes," and “God creates all life.” As a person who struggles with intimacy, I wondered if the devil was really trying to screw me up by making me regret my progress with intimacy by making me pregnant. Being reminded that God is solely responsible for the creation of life was key.

In a later conversation with my doctor, I was told that the medical risks to my life with this pregnancy were fairly low. The pregnancy hormones would undoubtedly cause my fibroids to grow quickly and I would have even more discomfort. I would also have more of the same intestinal difficulties I had already been having, probably worse, but there was no life threatening risk to me. The big risk was to the baby. The baby only has a 50/50 chance of being born alive. With my age and the fibroids, lots of things could go wrong. I could miscarry at any time... next week, tomorrow, 3 days before due date. The funniest thought came to me... “I should terminate because its best for the baby.” What? You might not live so lets just kill you... that makes a lot of sense. I knew without doubt after that conversation with my doctor, I was going to be pregnant for awhile. I would be pregnant as long as God thought I needed to be... and that just might mean for 8 more months.

My friend told me that the reason I got so mad was that I knew there was no way I would choose termination, even though that would have been my “easy” way out. I have to agree with her. She also said that what is happening in my life right now is proof positive that God’s promise to never let us go can be counted on. I wasn’t sure what she meant by that at first, but I’m starting to get it.

When I turned to God and gave myself to Him years ago, He did promise He would never let me go. It would be really easy for me to look at these circumstances and only focus on the feeling that God is square in the middle of letting me go because I am not getting what I want. But, if I choose to look deeper I can see His promise being fulfilled. He hasn’t let me go at all, in fact He has such a good grip on me that He absolutely will not let me turn from Him by making a mistake I will most assuredly regret. He has installed the Spirit within me so strongly and placed the right people around me so perfectly that I am not able to follow my flesh, I must follow Him, even though it’s not at all what I want. If that isn’t His promise being upheld, I don’t know what is.

I have a feeling I know what God is after from me right now in this situation and He has put me in a place where I do not have a choice but to choose what He wants for me. Well played God. I guess when I asked You to help me break free from the things that hold me back from You I should have put a non-pregnancy disclaimer in there (not that it would have mattered). I guess it’s true, be careful what you ask for... especially when you’re asking for it from God.

The one thing I have liked about this experience is the amount of understanding and support I have received from the people who know me best. I am amazed at how God has shown me in the last few years how to not only be a better friend, but how to choose better friends and uphold appropriate boundaries that keep a friendship strong. I never thought I would deserve to have such quality people in my life... but I see now that I do because I have learned how to be that back. I want to thank all of you who have had such encouraging and understanding words for me in this tough time.

I have already decided what I want to name our new daughter... yes, I "know" it will be a girl because I am much more comfortable with boys so therefore God must make it be a girl. But the baby name is a whole other story... you'll have wait for that one. In the meantime, I'd appreciate any prayers for my family... for us to have peace with however this ends up... and if you could sneak one in requesting relief from my nausea - that would be great too. Thanks for reading.
Created by Wendy at Sunday, May 06, 2012