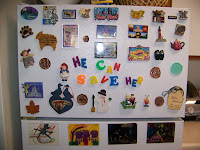 This morning I was sitting on the floor in my kitchen playing a refrigerator game with my son. He was tossing magnets at the refrigerator door to see how many of them he could make stick. It turned out to be a lot more difficult than he imagined. It’s a basic law of attraction: magnet… refrigerator… shouldn’t they all stick easily on the first toss?

Brett is the kind of boy who likes to do easy things. He tends to shy away from things that he can’t do perfectly the first time he tries. As with all of us, he really enjoys success and avoids failure at nearly any cost. I am trying to teach him that failure is a very important part of life. When things are difficult for us, we must keep trying, learn from our mistakes and practice practice practice. If we keep it up, we eventually will have success. I read a book called “Failing Forward” and it changed my attitude about failure. I realized that failure is not something we can avoid, unless we want to do nothing at all. It’s not a bad thing… it’s a necessary stepping stone to greatness.

So there we were sitting on the kitchen floor (which I noticed was really dirty… to-do add on: mop kitchen floor), he was tossing magnets toward the refrigerator in a game that should have been easy but ended up being a game of chance. Only about ¼ of the magnets stuck and the rest fell to the floor.

I looked up at the refrigerator and saw a poster I have on there… a poster that has been there for over 2 years. It was one of those things I put up there as a reminder to myself but then got so used to seeing it that I don’t see it at all anymore. It says:

“WARNING: Intolerance Will Not Be Tolerated!”
This quote makes me chuckle because of its oxy-moronish statement. I see myself (the new creation Wendy, not the old dead Wendy) as a fairly tolerant person. I love people, especially people who are screwed up because I myself am quite a bit screwed up. I feel like God has gifted me with a vision of people that is deeper than their problems. I see beauty and hope in messed up lives… I see grand opportunity for God to come alive in a real and tangible way. So, I like to think of myself as very tolerant. But… as I sat on the floor looking up at this reminder, I realized there are few people in my life that I have become a person who, instead of embracing them as beautiful screwed up people who carry a promise of hope but just haven’t fully gotten there yet, I have become a person who silently yells, “Intolerance will not be tolerated!” at them. There is one person in particular that I have really been struggling with… and I have to say resentment has built up a wall that has blocked be from seeing their God molded beauty. Part of it is that this person is almost EXACTLY LIKE ME. For some reason, it’s harder for me to tolerate their behavior because it is so much like mine used to be before I fully gave my life to Jesus. A very wise friend of mine suggested that perhaps my specific intolerance of this person was more a reflection of how I felt about myself… perhaps I have not fully forgiven myself for my poor behavior in the past. Wow, the insight the Spirit gives others to tell us our truth is amazing when we open up and become transparent with the right people.

Back to the magnets, as I watched little Brett’s game continue, I was completely surprised at how easy going he was about his failure rate, again only about a quarter of the magnets were sticking. Instead of whining and becoming intolerant of the ones that fell to the floor, he rejoiced in the ones that stuck. I wondered if maybe my lessons of continuing to try had finally begun to stick with him. But what he did next really taught me a lesson. When all the magnets had been tossed… he picked up the ones that had fallen to the floor and “failed” him and instead of giving up on them or throwing them away, he gave them a second chance. He began tossing them again.

It is amazing to me how my 4 year old child can teach me such valuable lessons in life. Of course, he has no idea but wow… the wisdom of a child! I will take the advice of my wise friend and look a little deeper at my own self-forgiveness. I will try to stop passing right over the poster, “Intolerance Will Not Be Tolerated” and take time to actually SEE it. And, I will hug my child with a silent thank you for reminding me that God never gives up on us, no matter who we are or how many times we fall to the floor. I want to be more like that.
Created by Wendy at Saturday, December 05, 2009