Warning... Written by a Girl Who Is Crying...

It has been a very sad day for me. I made the decision that it was time for my little doggy, Tori, to go meet her maker. It was one of the toughest things I have ever done in my life and as I sit here now, I am relieved it is over. I am not relieved she is gone, but I’m glad that I don’t have to ponder the subject of “when” for another moment. I was really hoping she would just drift off on her own one night but… that would have been too simple, especially for a very complex, neurotic dog like Tori.

I joke that she was the most expensive dog ever purchased. It’s not that she cost that much… it’s that I purchased her on a credit card with 10% interest and then didn’t pay it off for over 10 years. With compounded interest, late and over the limit fees the little American Eskimo Spitz puppy was by far the most expensive dog in the world. I may not have been very responsible with my money back then (obviously) but taking care of her taught me a lot about responsibility in general. I wasn’t always very good at that responsibility, but I did my best.

I am regretful of several poor decisions I made as her owner. Sometimes the men in my life were more important than she was. Sometimes I didn’t do a good enough job at protecting her from herself (not putting the trash places she couldn’t get to it). I didn’t give her enough discipline and as a result, she was really hard to control later in life… especially after Brett was born. I yelled at her for things that weren’t really her fault… and I left her behind at the kennel for most of the big events of my life.

I am disappointed with her that my son didn’t have a dog that loved to play with him and romp around in the back yard playing ball. Instead, I had to protect my child from the unpredictable nipping and bite of a very jealous little animal. But that was my fault… I didn’t do the kind of research I should have before purchasing the little puppy. I bought her based on cuteness… only to find out later that she was not a very baby friendly animal. Yes, I am disappointed that the birth of my child caused so much angst for little Tori… and for me.

I am angry about all the things she destroyed through the years… oh my goodness! She could chew through anything. One day I awoke to a big hole in the drywall of my bedroom wall. She ate clothing, shoes, furniture, books… basically anything she could get to. I’m also angry that she barked so dang much. It was so annoying, especially toward the end of her life. She was deaf so she barked even louder then normal. Her only joy in life in the final days was to bark for treats – and she did it ALL DAY LONG. She was tenacious too… barked until she got what she wanted. It would infuriate me.

But, mostly I am thankful. She was my one and only friend for many, many lonely years. She saw me at my worst so many times, in fact, she was the only one who knew the real alcoholic Wendy at her worst. I never hid my behavior from her…and she just kept on loving me. She would lick my tears and entertain me endlessly. She helped my husband propose to me… he tied the ring around her neck and I am so thankful I kept the ribbon he used. She provided me with many good memories through the years… the way she rode in a milk crate in the back of my two-seater convertible back in my early twenties. The time she absolutely refused to forget about the hotdogs a neighbor tossed over their balcony edge… she knew they were there and she was gonna get them by golly. That went on for days! When I lived in Maryland, there were some huskies that lived behind us. The firehouse was close by and when the alarm went off those huskies would howl at it. Tori wasn't a very good howler but she sure did try to join in. She would stand up and make sure I wasn't watching her (as if embarrassed) then slowly begin to try to howl. Her voice would crack and she sounded silly but I'd just pretend I didn't hear her just so she'd keep doing it. We took her with us on all our family reunion Outer Banks trips and boy did she like running on the beach and digging in the sand. And what about all the nights she kept me safe from the boogey man when I lived alone and then later, when my husband was out of town. I can see her running happy and free in the pasture and yard at my parent’s farm in Virginia. She only got zapped by the electric fence once or twice before learning not to go near that. And just his past Thanksgiving… oh the fun we had with her trying to keep her out of the kitchen… you had to be there… it was hilarious.

She was a good little dog… even though I failed her in many ways. I’ve said she was annoying to many people, I’ve jokingly tried to give her away more times than I can count but all of her horrible habits were of my own making… my fault…. and for that I say to her… I am sorry. I am also sorry that I, the hand that had fed you for years, kept you safe, happy, protected and warm was the hand that brought about your final moments on earth. For that… I am truly sorry. I hope you will forgive me.

I held her in my arms, looked in her eyes as she slipped away… I told her I loved her and how much she meant to me and then I asked God to take good care of her. She was His long before she was mine, so I know He will. 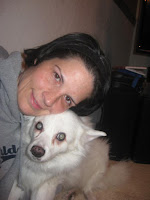