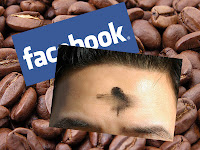 A pastor friend of mine decided to give up coffee for Lent. To the average coffee drinker, I’d say this, “Are you sure… I mean really sure you want to do that?” but to this particular friend I said, “Are you insane??? Holy crap… What are you thinking???” He loves his coffee… I mean LOVES coffee! I am not lying when I say… he even drinks coffee when he is preaching.

His response to my “Holy crap” statement was so perfect. He basically told me that even though for him it was a big deal to give up something like coffee for Lent… when comparing his sacrifice to that of Jesus’ sacrifice for us… giving up a thing like coffee was no big deal. His answer, as perfect as it was, as right as it was… was like a dagger to my heart. Oh, I am so selfish. I support my friend with all my heart in his commitment and sacrifice to give up something he loves to celebrate this season… this beautiful season of sacrifice. Because of him I decided to give up something myself for Lent. This is my first time EVER fasting from something for this season. It might sound silly, but I gave up Facebook. Trust me, that is a sacrifice for me. It’s like digital crack. In addition, I decided that every time I think about Facebook in any way – I’m going to stop what I am doing and talk to God. I think I’ve spoken to Him about 35 times already… and it’s only 1:22 on Ash Wednesday.

I’m embarrassed to admit this, but I’ve lived my entire life… a Christian childhood, destructive youth and early adulthood as well as into my new life of salvation in Christ without knowing what Ash Wednesday really meant. Now, don’t get me wrong… I’m sure along the way in all the years of Christian parenting, church services, Sunday school, confirmation, youth outings and more recently lots of Bible reading, Christian study and Jesus based recovery work… someone… probably many people have told me what Ash Wednesday was all about but for whatever reason, I forgot, or didn’t listen (probably the latter) so I ended up here at 37 years old ignorant of the meaning and purpose of Ash Wednesday.

This morning, Ash Wednesday of 2010, I decided I was going to educate myself a little… so here is what I learned. Ash Wednesday is supposed to be a day of fasting and repentance in preparation for the season of Lent. In Lent we go through the stages of Christ’s sacrifice for us…. we pause at Good Friday for reflection then rejoice on Easter as we are reminded that the war has already been won. I knew some of that already… here’s what I didn’t know…

The ashes of Ash Wednesday are what make it so significant. It’s not that it’s cool to walk around with a black cross on your forehead or that there is any medicinal advantages to the ashes. The ashes actually MEAN something. Ashes were a sign of deep mourning in the old days. It wasn’t regular old mourning though… dusting yourself with ashes was a way of expressing sorrow for YOUR OWN sins and faults. Job 42:6 says, “Therefore I despise myself and repent in dust and ashes." Wearing sack cloth was similar. It was a way of admitting wrong and repenting. I can’t really think of a way we signify that in today’s world at all, other than… pointing at someone we don’t like and saying “It wasn’t me!” (that was a joke). Oh wait a minute… that’s exactly what Ash Wednesday is, DUH! Wearing ashes, choosing to fast (from at least one thing) in an effort to admit our wrongs and sins to our Lord. It has always been about that, I just didn’t realize it! And those ashes… they weren’t just scooped up out of your pastor’s fireplace. Did you know that the ashes used on Ash Wednesday are produced by burning the palms used on the prior Palm Sunday? I thought that was a particularly interesting fact and I wondered how many churches really still do that.

Ezekiel 9:3-6 says this… “Then the LORD called to the man clothed in linen who had the writing kit at his side and said to him, "Go throughout the city of Jerusalem and put a mark on the foreheads of those who grieve and lament over all the detestable things that are done in it." As I listened, he said to the others, "Follow him through the city and kill, without showing pity or compassion. Slaughter old men, young men and maidens, women and children, but do not touch anyone who has the mark. Begin at my sanctuary." Based on this, there have been a bunch of Ash Wednesdays I should have been slaughtered for not taking the time to get “marked” or grieve appropriately for the horrible things I myself and society do everyday.

I’m sure there is a lot more to the meaning of Ash Wednesday… but those were the basics I found that satisfied my thirst for knowledge on the subject. I thought I was so clever when I had the idea to name this article “Ashes Ashes… We All Fall Down”. I actually did a little giggle to myself about it because it seemed so perfect. Ashes will sure remind me from this day forward of how flawed I am… how no matter what I do I will always fall down. Thank You Jesus for Your obedience to Your Father. Thank You for Your sacrifice for such undeserving people. And thank You for showing me that even if I were the only person on the planet… the only being to have ever lived… You still would have done it… You love me THAT much. You’re right, Joe… coffee ain’t nothing!
Created by Wendy at Wednesday, February 17, 2010