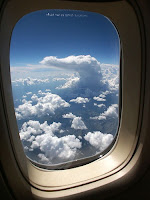 Someone recently asked me to think about some hard questions… why would a loving God allow tragedy to occur? If God is so powerful, why doesn’t He keep bad things from happening to good people? The purpose of combing over these questions was to prepare myself for the type of doubt that I will inevitably be faced with as I try to share Jesus with others. These questions are hard… even for people with tremendous faith in God. One of my spiritual mentors says, “If you knew what God knows… you wouldn’t doubt what is happening right now for even a nanosecond.” In theory, it’s easy to say I know all things happen for a reason and God’s plan is to bring them together for His glory in the end. Since we humans can’t see His plan, we can’t fathom His reasoning. And then there is the topic of free will, but that would be a whole other article. I’m not going to kid myself for a second though; I am fully aware that if a tragedy were my very own, for example - the loss of my husband or child… I could only hope that my faith would be strong enough to say, “It’s God’s plan for the best” and mean it. The truth is… I don’t know how I would feel. I can’t imagine it, and I don’t want to think about it. I said some prayers for God to help me figure out how to answer those types of questions.

A few days later, I had a vision that I shared with a group of ladies I trust. I knew I trusted them when I told them because let’s face it – most people would probably laugh at me as soon as I uttered the phrase, “I had a vision,” much less keep from busting as I told the story that followed, but they were awesome about it. True friends.

There was an airplane, packed full of at least 200 passengers. But it wasn’t a run-of-the-mill flight… something had gone terribly wrong and the plane was on a very quick downward descent. And I’m not talking about the kind of descent that would result in a gentle water landing… oh no… this was a hold-onto-your-seat-cushion-and-kiss-your-butt-goodbye kind of descent. The people on board were panicked, screaming and crying… they knew what was to come. In my vision, I saw a person rise from their seat and begin to speak to everyone on the plane. This person spoke with great eloquence… telling all within earshot of the gift of Jesus and how it didn’t matter what they had done in the past, or how long they had believed… that God’ kingdom was for everyone and all they had to do is believe. The person continued by asking the people if they would consider opening their hearts and souls to the Spirit. Ask Him to help them believe and accept God’s grace and love. The end of life as they knew it was not as important as the beginning of the life they could have in eternity with God.

I began to cry… even though it was only a vision. The words that this person spoke were so beautiful and true. And somehow an idea came to me… of God’s reasoning in this particular situation. Of the 200 passengers on board, only a few of them were true believers in Christ. Another handful were in various places on their spiritual walk… mostly just testing the water but not really committed to it. The rest… the majority of them were people who had no interest in God. They knew of Him, but were sure God didn’t have a place in their life at all. God, being all knowing as He is, already knew the ending of each of these people’s lives. He knew that it would take a major event to open their minds up to the possibility of Him. He knew that this was the situation they HAD to be in to save their souls. So He grasped the opportunity. He put the right words in the right person’s mouth and the result of which was… these people… the ones who God knew had no hope at eternal life with Him heard the words, opened their hearts, the Spirit came to them and… BAM! They were granted eternal life right before their death.

My tears increased as I sat in awe of this thought. I imagined the heartache and pain of those left behind in the wake of the disaster; husbands without wives, mothers without daughters, friends without their cherished confidants. It’s natural for those people to only see the tragedy in the death toll, and feel the gut wrenching emptiness that death presents to us on a silver platter. But what about the mercy and beauty in God’s perfect timing? What about the fact that our God is so loving that He doesn’t care how long we’ve believed… as long as we do?

So, the vision was over, or so I thought. I cleared my crying eyes and took a deep breath. Then I realized… the person who spoke on the plane of God’s open arms was… me. I rejoiced at the thought that God could use me in that way. Then some doubt wandered in, I asked myself if I would have the courage to stand up and say those things. I wondered if the right words would really come to me? After some thought I knew the truth and I told myself, “Yes! I would do that for God, I would stand up no matter how afraid I was and be that person!!!!” And then I realized… I had a flight in 3 days. On top of that, my child was flying with me. If this vision was for real… it would not only mean sacrificing myself… but my child.

Now, I don’t know how you feel about visions… I’m sort of on the fence myself. I’ve had some come true and some not. This one, all I can say is I was afraid of it. The thought occurred to me to cancel my trip, but I quickly realized that was the devil… messing with me. More than likely, this whole vision was the result of my prayer about how to answer the hard questions. And, it also was an opportunity to put my faith in action. I decided, I was getting on that plane no matter what. In fact, I was getting on every plane I ever needed to get on for the rest of my life. If God has this plan for me, I wasn’t going to run from it. I was reminded of the story of Jonah. God would put me right where He wanted me no matter what – it was up to me how much I kicked and screamed about it. In making the decision to trust God, I realized I had shut down the devil’s plan to make me a doubting coward. I laughed at him… he he he… sucker! Then I proceeded to tell my few trusted friends about it, just in case it happened… they would know.

I’m not gonna lie, I was nervous as I walked through the next two days. I had this strange yet calm feeling that I might not be around any longer. I rejoiced at the thought of being in heaven… then felt sad for my husband and how that would effect his life… and the thought of my son… ah, a dagger to my heart. But I looked to God and said… send me, I trust you.

The morning of my flight I got up and took my shower. Got dressed then went to brush my teeth. As I looked in the mirror, I said a prayer in my head. “God, if this should be my last day on this earth, let me be the best example for you I can be in everything I do…”

Shouldn’t that be my state of mind ALL THE TIME??? Shouldn’t that be my desire regardless of a vision or fear of impending death?? I mean, vision or not - this could be my last day... tomorrow could be my last day... who knows when it's gonna happen!!!! It was at that moment I felt like I understood what God was trying to teach me. Live everyday as if it’s your last… live every moment as though you can’t take it back… don’t let opportunities to do the right thing, share the truth or just be nice slip away!!! WOW!!!! Sure I’ve heard all that before, but this was something different… this was me going through the emotion of it all.

Okay, so I was still a little bit nervous about my flight… less nervous when I realized I was sitting in the window seat while the person in my vision was sitting in an aisle seat (phew). But there was an awful lot of turbulence on that flight, more than I had ever endured before. In the end, I sighed a giant sigh of relief once I made it to Virginia. And I was proud that I had allowed my faith to grow instead of chickening out… but mostly I felt enlightened by God and so encouraged by the way He not only answered my question but also showed me His heart. We truly never know His reasoning and we will never know what happened in those moments right before the tragedy. All we can do is believe that The Creator of the universe loves us and knows what He is doing. I have no doubt He wants every single one of us by His side in the end. A few days later, I realized I still had the fight home to contend with… but it was all good.
Created by Wendy at Tuesday, February 02, 2010